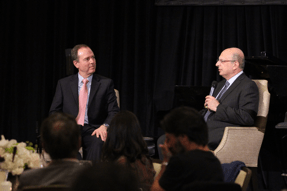 Los Angeles, California – The Public Affairs Alliance of Iranian American’s IA-100 proudly hosted our annual Retreat and Gala for members and special guests at the Montage Beverly Hills on October 7th. The event assembled Iranian Americans from across the country, including elected officials, foreign policy and immigration experts, best-selling authors, and members of PAAIA’s Emerging Leaders to discuss critically important issues to the Iranian American community. For photos of the event, click here.

The Retreat portion of the event was composed of four in-depth panel discussions, the topics of which ranged from building strategies to enhance the image of Iranian Americans, reconciling the discriminatory immigration policies set forth by the Trump Administration, addressing the Trump Administration’s threat to decertify the Iran Nuclear Deal and set the United States on a dangerous path to war, and the future of artificial intelligence.

At the evening gala, IA-100 hosted our guest of honor, Ranking Member of the House Intelligence Committee, Congressman Adam Schiff (D-CA). Congressman Schiff is helping lead the House Democratic resistance against President Trump’s discriminatory immigration policies – including the travel ban. He was also a vocal supporter of the historic Iran Nuclear Deal and has warned the Trump Administration against abandoning the deal. Moderated by Cyrus Amir-Mokri, a former Obama Administration official, Congressman Schiff engaged in a constructive dialogue at the gala, responding to questions from the audience on a variety of issues and meeting with members on a one-on-one basis. 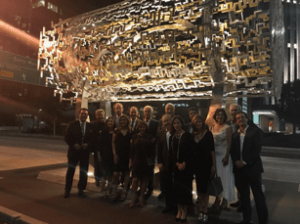 IA-100 also honored three remarkable members and advocates of the Iranian American community with prestigious awards. Los Angeles Mayor Eric Garcetti was presented with an IA-100 “Distinguished Public Service Award,” and Hadi Partovi, CEO and Co-Founder of Code.org,was presented with the “Career Achievement Award” for his successful development of computer programing education across the United States. Finally, the Farhang Foundation received IA-100’s “Excellence in Community Service Award” for celebrating and promoting Iranian art and culture for the benefit of the community at large, including the Los Angeles Freedom Sculpture, unveiled on July 4th, 2017.

The retreat facilitated imperative conversations about how to build an influential voice and image for the Iranian American community. This event would not have been possible without the hard-work and dedication of many helping hands, and IA-100 would like to thank all our excellent panelists, moderators, volunteers, as well as all those who participated and attended the retreat and gala. A special thank you goes out to Ardeshir and Tania Tavangari for hosting the IA-100 Welcome Dinner on Friday night.

If you would like to watch our video of the panel “Coming to America: The Immigration and Visa Quagmire,” please visit PAAIA’s Facebook Page.

IA-100, Inc., a PAAIA affiliate, is a 501(c)(3) tax-exempt nonprofit organization, headquartered in Washington, D.C., conducting a variety of initiatives that benefit the Iranian American community and the U.S. society at large. IA-100 strives to provide leadership with the purpose to build an influential voice for the Iranian American community, encourage constructive relations and enhance mutual understanding between the peoples of Iran and the United States, and position the next generation of Iranian Americans for success.