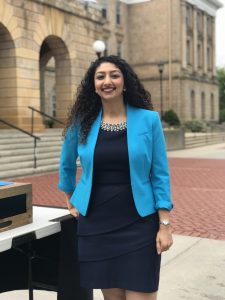 If elected, she would be the first Iranian American to serve in the Wisconsin Legislature.

Shabnam is a Progressive Democrat, a University of Wisconsin Law School graduate, an immigration attorney, and a small business owner.  Born in Tehran, Shabnam and her family left Iran for the U.S. during the Iran-Iraq War.  Shabnam cites her experiences in Iran as a major influencing factor in her life, deciding as early as seven years old that she “wanted to be a lawyer so that no one else experienced what my family and I had experienced.”

Since then, Shabnam has used her time and expertise to fight for justice.  As an immigration lawyer and politically engaged citizen, Shabnam sued the Trump Administration over the implementation of the Travel Ban.  She also participated in grassroots efforts in supporting women’s rights, sensible gun safety regulations, and curbing climate change.  In line with her passions to fight for justice, Shabnam is now seeking to represent Wisconsin’s 77th District in the State Assembly.

Shabnam will face three other opponents in the Democratic primary for the 77th District seat, which is now open with the retirement of Rep. Terese Berceau.  The 77th District is located in Madison, Wisconsin and is home to the University of Wisconsin-Madison.  It is considered a safe democratic district with the winner of the primary becoming the presumptive state representative.