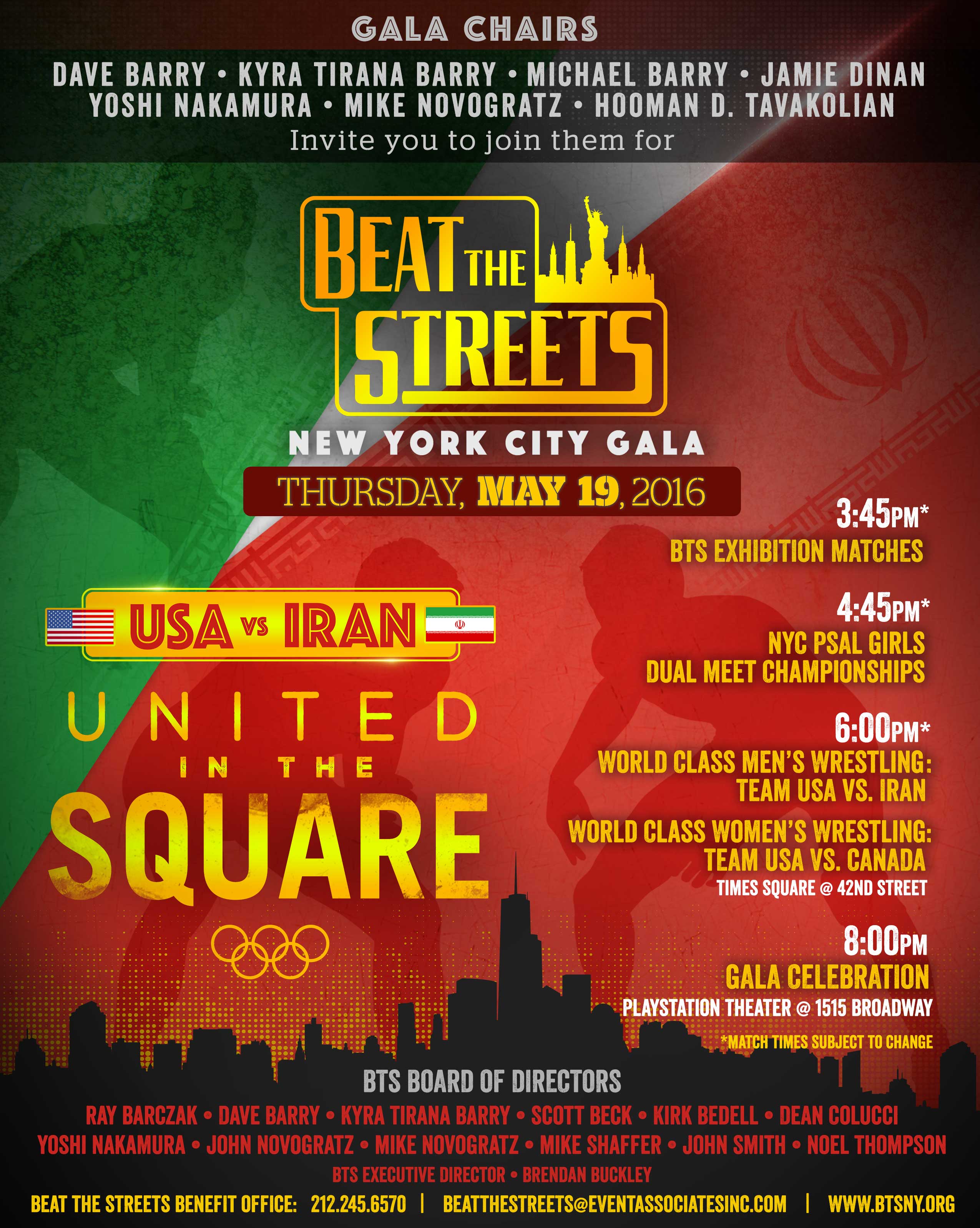 May 11, 2016, Washington, D.C. – On Thursday, May 19, members of the Iranian and American national wrestling teams will meet at Times Square in New York City for a public exhibition match. The match, which aims to bridge political and cultural differences between the two nations, has become a New York tradition since its inception in 2013.

The event was created in early 2013 after the International Olympic Committee (IOC) voted to remove wrestling from their list of “core sports”. The Iranian, American, and Russian national wrestling teams organized in response, hoping to demonstrate the powerful role that wrestling plays in keeping peace between countries which are notorious for their political tensions. Events like this were so influential in demonstrating the significant role that wrestling plays in international diplomacy, that the IOC repealed its decision to remove wrestling from the Olympics later that year.

Hooman Tavakolian, who acts as the Iranian national team’s liaison in New York City, lives in the U.S. and serves on the wrestling committee out of the highly esteemed New York City Athletic Club. Tavakolian is an outspoken advocate for the Iranian-American wrestling exchange and other events which promote wrestling’s role in the international community.

In an interview with Donyaye Koshti (“Wrestling World”) magazine about the upcoming event, Tavakolian said he believes that it is important to promote wrestling’s role in international relations. “[Wrestling]”, he says, ”has no borders and because of wrestling I have made so many friendships around the world”. Tavakolian believes that events like these can be incredibly influential in promoting international diplomacy.

Although this event is relatively new, modern sports diplomacy dates back to the Nixon era. In early 1971, a group of American table tennis players were invited to the People’s Republic of China. This initiation of contact between China and the U.S., while not expressly political, served as a test for the success of diplomacy between both nations. An American athlete who participated in the exchange was quoted as saying: “The people are just like us. They are real, they’re genuine, they got feeling. I made friends, I made genuine friends, you see. The country is similar to America, but still very different. It’s beautiful”. Less than a year later, Nixon himself was invited to China. This was the first time in 25 years that China invited a U.S. President onto Chinese soil, marking the beginning of a thaw in U.S.-China relations that continues to this day. The exchange, coined the term “ping pong diplomacy”, and demonstrated the impact that civil contact can have in swaying public as well as political sentiment.

Iran-U.S. relations have undoubtedly been strained since the Islamic Revolution ended all diplomatic relations between the two countries. Wrestling overcomes linguistic, political, religious, and racial differences, finding commonalities between. Just as ping pong paved the way for Chinese-U.S. diplomacy 40 years ago, wrestling has a unique potential to foster a broad sense of camaraderie between Iranians and Americans that could help to inspire increased exchange and engagement in the future.