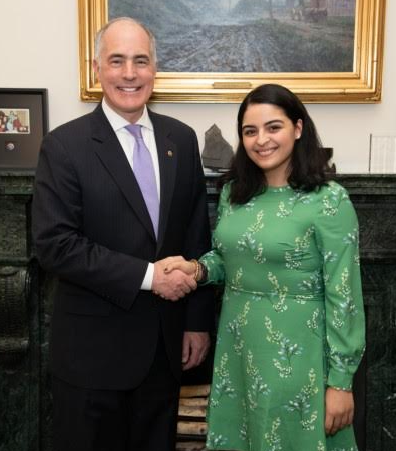 Washington, DC — This past semester, I had the honor of serving my home state of Pennsylvania as a Legislative Intern for the Office of Senator Bob Casey. Initially, I was most intrigued by the wealth of knowledge I would gain about congressional and legislative processes. After a number of internships in the private sector, I wanted to walk away from this internship understanding the behavioral approaches to legislation from those on the front line. Equipped with formal business attire, my Capitol Hill badge, and financial assistance from PAAIA, I was ready.

In Senator Casey’s office, I was assigned to support the Economic Development team. The legislative staff I supported covered a number of important topics of 2019, such as the 2019 Government Shutdown, affordable public housing, and small business innovation to name a few. My day-to-day responsibilities differed depending on the week and the Senator’s priorities. However, on the top of that list was always the constituents. In the whirlwind we call Capitol Hill, this priority provided my internship clarity and purpose.

Being an intern in the Senate, I got to read, hear, and see exactly what the Senator’s constituents were requesting of him. These constituents’ requests were where the Senator would gain new insight and inspiration for his next speech on the floor of the Senate or the introduction of a bill he decided to sponsor. The journey of a constituent letter from the mailroom to the floor of the Senate interested me not only because of its legislative importance, but because of the responsibility we have as voters, advocates, and allies. I asked myself the question: what does effective advocacy look like?

While sifting through constituent correspondence, I realized that the role of political advocacy has evolved over time. Many in my generation have gone from writing letters to Senators to writing tweet threads and creating multi-page Instagram stories to educate our friends and families about U.S. politics. Although many of these personal blurbs may gain traction within our own circles, we must not forget our civic duty. Preserving our democracy does not start and end with just casting a presidential ballot. Engagements with our governmental and political institutions are imperative at the national and, especially, at the local and state levels. Duties such as lobbying our elected officials via calls, letters, and stories provide dimension to the struggles and causes important to us. It enables us as advocates and allies to protect our community from discrimination and other communities facing similar social or economic struggles. I found this to be especially important for communities, such as the Iranian American community, who are underrepresented in the institutions that are meant to represent us. It is now our responsibility to create our own representation at the table and have a menu of demands ready that is inclusive to our own needs and those we serve as allies to.

Having an impact on what is said on the floor of the Senate or a vote by your Senator simply by sharing your story or perspective is what makes such democratic institutions worth fighting for. This is what the PAAIA CHIP program allowed me to accomplish. By taking heed of my own story and perspective as an Iranian American, I was able to meet with chiefs of staff, legislative directors, and legislative staffers to discuss how I could become a stronger advocate for causes that were important to me, on and off the Hill. In doing this, I hope to disseminate what I learned to other advocacy groups and members of my community to strengthen their advocacy efforts as well.