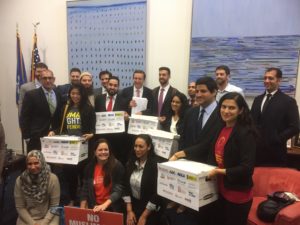 Washington, D.C. –This morning, a coalition of 15 organizations delivered a joint petition with over 100,000 signatures to members of Congress calling for legislation to rescind the newest version of the Muslim Ban immediately.

“We call on Congress today to rise to the challenge of putting country before politics and to protect the rights of all people living in the United States by defending the Constitution,” the joint letter read, “and by rejecting the ‘total and complete shutdown of Muslims entering the United States,’ from forever being enshrined in history books as the official policy of the United States.”

The 15 organizations are calling on Congress to “fulfill their duties and immediately pass legislation to rescind the unconstitutional Muslim ban and make absolutely clear that such attempts to target Muslims, or anyone on the basis of national origin, are unlawful.

The petition was delivered to the offices of Senator Chris Murphy (D-CT), Senator Mitch McConnell (R-KY), Senator Chuck Schumer (D-NY), and Senator Diane Feinstein (D-CA). With the House of Representatives out of session this week, the petition will be mailed to House Speaker Paul Ryan (R-WI) and House Minority Leader Nancy Pelosi (D-CA). Today also marks the day that the September 24 presidential Proclamation, commonly known as Muslim Ban 3.0, was set to go into effect.

PAAIA remains vigilant in responding to measures that unfairly target our community, and we will continue working tirelessly with our coalition partners to ensure liberties and freedom are granted to all American citizens.
Share Post: