Washington, DC – On June 5th, the Public Affairs Alliance of Iranian Americans (PAAIA) and the Iranian American Bar Association (IABA) held a panel discussion with the American Civil Liberties Union (ACLU) called Understanding our Place in the U.S. Constitution: Iranian Americans and the Struggle for Civil Rights and Equality.

During a time when the Trump Administration continues to promote its discriminatory travel ban, this discussion on Iranian American civil rights and equality brought more than fifty community leaders and organizers to ACLU’s national headquarters and over 3,200 members of the public watched PAAIA’s livestream video of the event on Facebook. 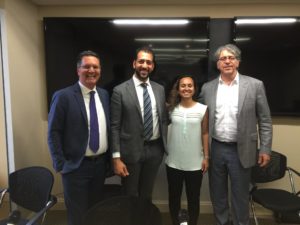 The panelists discussed the safeguards against discriminatory treatment of minorities, explained the resources available to victims of civil rights discrimination, and highlighted the ways in which the Iranian American community has stood up to discriminatory hate crimes and measures like the travel ban.

Abdi Soltani opened the discussion with a broad overview of civil rights history in the United States, pointing out the importance for minority groups to exercise their civil rights whenever they are challenged. Soltani also said that “the events of the last few months have made the Iranian community much more aware of the rights we have and the rights that can be taken away, which is why it is important to build a strong relationship between the ACLU and the Iranian American community.”

Cyrus Mehri, was lead counsel for the federal lawsuit against the travel ban, Pars Equality, et al v. Trump, brought up the fact that Iranian Americans believe it is important to balance national security interests while upholding civil rights. “If there was a legitimate national security threat addressed in the travel ban,” said Mr. Mehri, “Iranian Americans would have supported it, but this is not the case.”

Additionally, IABA’s Director of Legal Services in Washington, DC, Ali Rahnama, highlighted the Iranian American response to the travel ban, including dealing with the chaos that erupted at airports across the country after it was initially enacted. “IABA served as the community’s first responders to the tragedy of the travel ban,” said Mr. Rahnama. “We had a total of over 700 lawyers show up to help at airports across the country. When we saw all the lawyers and people who came out to support us, we saw civil society push back strongly against the travel ban.”