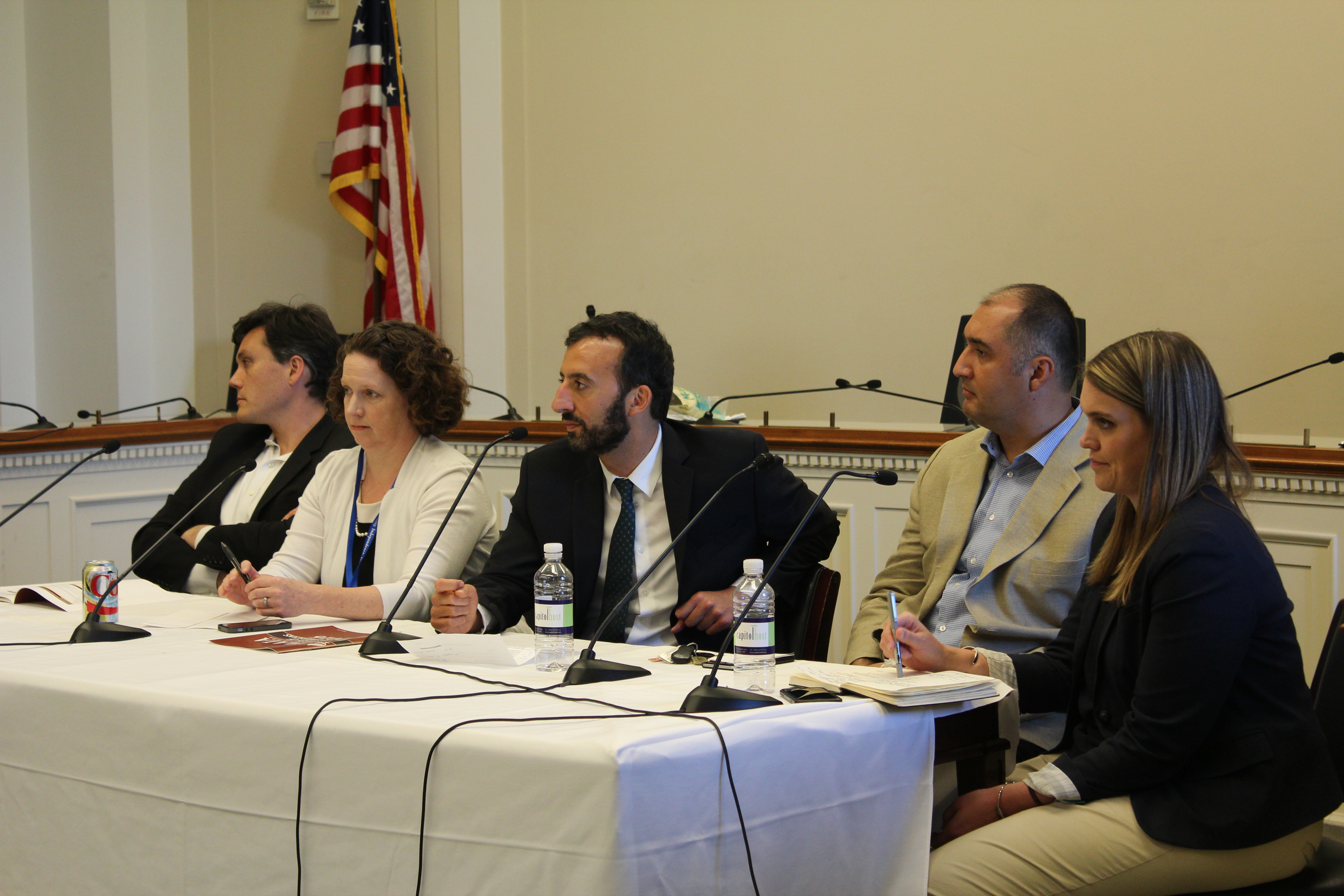 April 26, 2016, Washington, D.C. – On April 20th, 2016, the Public Affairs Alliance of Iranian Americans (PAAIA) held a congressional briefing to present the findings of its 2016 National Public Opinion Survey of Iranian Americans, followed by a panel discussion on Iran. In attendance, were more than fifty congressional staffers as well as representatives from the U.S. State Department and members of the media.

The event began with opening remarks from PAAIA’s Executive Director, Leila Austin, followed by a presentation of the poll findings presented by PAAIA’s Director of Government Affairs, Morad Ghorban. Conducted by Zogby Research Services, the 2016 poll examines the opinions of Iranian Americans relating to the newly implemented nuclear agreement, US-Iran relations, and the experiences of the Iranian American community. The results indicate that a majority of Iranian Americans expect the implemented agreement to positively impact US-Iran relations and improve the civil rights and economic opportunities of Iranian citizens. However, they are also concerned that their identification as Iranian Americans could lead to problems in terms of discrimination, particularly with the recent rhetoric of some presidential candidates.

Following the presentation, the panel of Iran experts provided an in-depth discussion of the status of the implementation of the nuclear deal, internal dynamics within Iran’s government (post 2016 election) as well as the broader political developments within Iranian society and the current state of human rights. The panelists included Kelsey Davenport, Director for Nonproliferation Policy at the Arms Control Association, Peter Harrell, Adjunct Senior Fellow at the Center for a New American Security, Suzanne Maloney, Senior Fellow at the Center for Middle East Policy at the Brookings Institution, and Alex Vatanka,, Senior Fellow at the Middle East Institute and the US Air Force Special Operations School. Alireza Nader, Senior International Policy Analyst at the RAND Corporation, moderated the panel discussion.

The panel discussion began as Davenport examined the nuclear agreement’s implementation, viewing it as a success thus far, but cautioning that the U.S. should remain vigilant to ensure that Iran continues to adhere to the deal. Harrell continued to cover the issue of sanctions relief under the terms of the nuclear accord and Iran’s reentry into the international financial market. He maintained that the Obama Administration is working to ensure that Iran receives the promised relief under the terms of the agreement but that the nuclear imposed sanctions could be quickly reintroduced should Iran violate the agreement, stating that there “is a credible threat of snapback sanctions.”

Vatanka described the internal political dynamics in Iran and its effects on the agreement, explaining that despite the number of moderates who won in the February parliamentary elections, the political climate of Iran remains highly adversarial. Maloney approached Iran’s human rights situation, arguing that although there have been radical changes in both the social composition of the country and within the political system itself, there remains a lack of accountability in the government and the judiciary and an “insufficient commitment to genuine justice.”

The final question the panelists were asked was what they would recommend to the next US President in regards to Iran and US foreign policy. The panelists unanimously agreed that the future US President should abide by the terms of the nuclear agreement and begin preparing for the time when Iran can increase its uranium. Harrell also suggested that the president contemplate the different scenarios available should there be a governmental transition in Iran. He asserted that the next president should build a toolkit of both sanctions and non-sanctions options to deal with non-nuclear provocative actions by the Islamic Republic.

prospects of individuals or groups involved in Iranian politics. Instead of trying to pick winners, we should simply support “any government in Tehran that adheres to its commitments, that upholds rule of law, that adopts responsible policies within the region, and all the other standards that we would apply to any other state in the world.” Trying to influence the power struggle in Iran is “a fool’s errand.”

Vantaka explained that the political structure of the country is very complex and that multiple families have ties to each other. The moderates today used to be the hardliners in the past and the policy prescriptions they put forward are more about catering to a certain group of people than actual differences in ideology. He stated that war with Iran would be a terrible outcome and he would always advise that the president should choose a diplomatic solution instead.

Click here to listen to the full Capitol Hill Briefing

Watch Video of Panel Discussion Below: