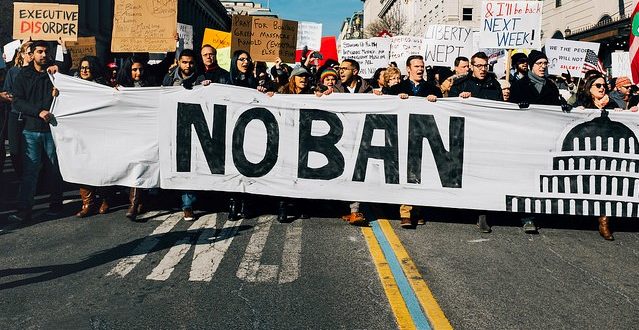 The U.S. Supreme Court recently upheld Presidential Proclamation 9645, also known as Travel Ban 3.0.  In doing so, the Court (like the government attorney) cited the “system of waivers” contained within the Travel Ban as a means for individuals to get relief from its strictures.  However, evidence uncovered to date by Iranian American organizations shows that the so-called waiver process is not what the government claims.

A coalition of Iranian-American organizations, including the Public Affairs Alliance of Iranian Americans (PAAIA), Iranian American Bar Association (IABA), and the Pars Equality Center, have been working with the office of Senator Chris Van Hollen (and some of his colleagues) in seeking an explanation of, and accountability on, the “waiver provisions” outlined in the Travel Ban.  As a result of those prior efforts by PAAIA, IABA, and Pars Equality Center, the State Department released a clarification letter back in February 2018, which provided some disturbing statistics on the implementation of the waiver program.  Since then, our organizations have continued working with Senator Van Hollen to obtain additional information on the so-called waiver system.  In response to those efforts, on June 22, 2018, the State Department provided, for a second time, the only additional, formally available information and statistics on the waiver system.

The new information provided continues to show a disturbing trend: in the words of Supreme Court Justice Breyer, the so-called waiver system appears to be merely “window dressing” to cover the real intent of preventing the entry of people on the basis of national origin and religion into the US.  The statistics from the State Department confirm that, as a result of the Travel Ban, out of the more than 28,000 relevant visa applications submitted as of April 30, 2018, only 579 were “cleared for waivers” – and it is unclear how many of those people have actually been granted waivers and received their visas.  In other words, in the six months that the Travel Ban has been in place (between December 2017 and April 2018), a mere 2% of applicants have been “cleared for waiver,” and far fewer have actually received a visa. The response letter also continues to provide vague descriptions of the already ambiguous criteria set for assessment of waivers, without providing any clarity on the standards or processes being used by the State Department.

These results are, of course, consistent with the amicus brief that our organizations filed in support of the Hawaii case before the U.S. Supreme Court, which was repeatedly cited by Justices Breyer, Ginsburg, and Sotomayor during oral arguments, and which confirmed that consular officers routinely fail to consider visa applicants’ waiver requests.  These results are also consistent with recent news articles on waivers, including one report on former consular officers who have referred to the waiver process as a “sham.”

The overwhelming number of waiver rejections, including those for people who satisfy the conditions identified in the Travel Ban itself, leads to the conclusion that a near complete travel ban remains in effect, despite the government’s repeated denial to the courts and the people; and that the waivers are simply “window dressing” for the Trump Administration’s Travel Ban policies.

PAAIA, IABA, and Pars Equality Center thank Senator Van Hollen for his leadership on this important issue. We will continue to work with legislatures, and other groups, to try to overturn or mitigate the effects of this discriminatory policy, and to hold the Trump Administration to account on the so-called waiver provisions of the Travel Ban.