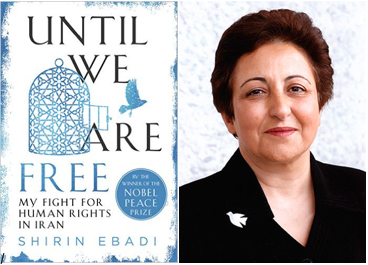 April 29, 2016, Washington D.C. – Until We Are Free: My Fight for Human Rights in Iran is an autobiographical account of an amazing woman’s struggles against the Iranian regime. It was released on March 8, 2016, and it provides an inside look into the difficulties that come with standing up for justice.

Shirin Ebadi was the first woman to become a judge in Iran prior to the 1979 Revolution. After she was stripped of her position under the new Islamic Republic, Ebadi helped to found the Defenders of Human Rights Center. This too was taken from her by the new regime when it was forced to close in 2008. For her tireless efforts to combat human rights abuses, Ebadi became the first Muslim woman to win the Nobel Peace Prize in 2003.

Until We Are Free is her first published book since she’s been living in exile. She details the challenges she has had to face as the Iranian authorities attempt to intimidate her and her loved ones, providing personal stories and thrilling narratives to illustrate her struggles.

As a human rights lawyer in Iran, Ebadi had to use Iran’s Islamic laws to combat human rights injustices. However, she found that it was not the Islamic laws that were the challenge but the Iranian regime’s interpretations of them. The government maintains that it cannot implement certain human rights principles because it is an Islamic Republic, but Ebadi asserts that this is simply an excuse.

“I am both a Muslim and a defender of human rights,” Ebadi has said. “These two things do not contradict each other in any way.”

Despite the current political situation in Iran, Shirin Ebadi has high hopes for the nation’s future. At the moment, she feels that the spirit of protest has been squashed as Iranians watch the tragic events of the Syrian Civil War unfold. They fear similar retaliation from the regime if they were to rise up or fight for democracy. Yet Ebadi believes that Iran has the potential to change significantly in the upcoming years.

She would like to return to her homeland when she is able to continue her job as a defense attorney there, when her colleagues are released from prison, and when the Defenders of Human Rights Center, which she initiated in 2002 was illegally closed down in 2010 by the Iranian regime’s security forces, can be reopened. She is hopeful to see Iran become more democratic and free.

“We have a good and active student movement. We have a courageous labor movement. We have a vast and powerful feminist movement. What is more, these movements cooperate with each other and listen to each other,” Ebadi said. “Iran has great potential for becoming a democracy.” Her incredible story of courage and compassion can be found at Amazon, Penguin Random House, and Barnes & Noble.