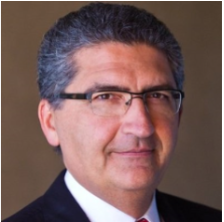 Darius Shahinfar is the CFO and Treasurer of the City of Albany. Elected in 2013, Shahinfar has attorney experience in both the public and private sectors as well as all three branches of government.

In his speech, Shahinfar highlighted the events leading up to his election, in which he earned the most votes of the citywide candidates. He further emphasized the importance of being active in local government, especially as members of the Iranian American community.

Ali Mojdehi, Chairman of PAAIA’s Board, was honored for successfully representing Iranian American Immigration Judge Ashley Tabaddor, in her suit against the U.S. Department of Justice, alleging that an order recusing Judge Tabaddor from hearing Iranians’ cases was discriminatory.

Ali Mojdehi In his speech at the IABA Nowruz Dinner, Ali Mojdehi, who is a partner at Cooley LLP in the Greater San Diego area, expressed his initial shock and disbelief when first hearing about Judge Tabaddor’s order to recuse herself from hearing cases involving Iranian nationals. “It was hard for me to believe that in these United States, something like this could happen,” he exclaimed.

When it became clear that litigation would be a necessary step to remove the discriminatory recusal order, Mr. Mojdehi reached out to various ethnic bar and advocacy associations to discuss the larger implications such an order could have. The issues in Tabaddor’s case had to be framed in a larger context, in which all ethnic groups could be affected.

“The injustice, which we intuitively felt, enabled us to marshal the resources needed to deal with a formidable adversary, an adversary with unlimited resources.” At the very first hearing, Judge Wu ordered the government to go to a mandatory settlement hearing, in which the recusal order was lifted and the Government agreed to review its policies.

PAAIA congratulates both Ali Mojdehi and Darius Shahinfar for this well-deserved honor.