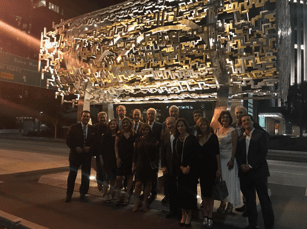 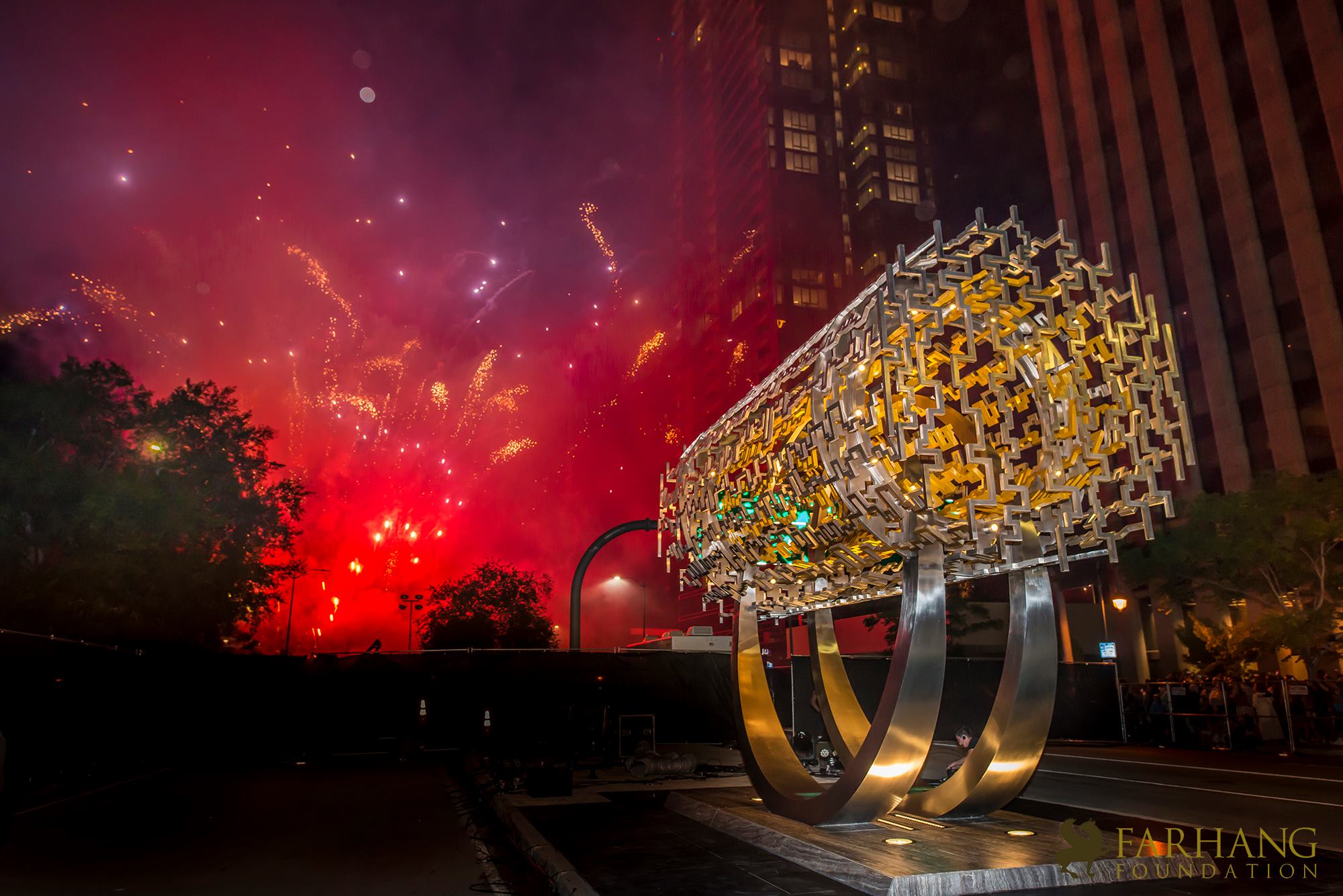 What originally inspired the Iranian American community to create a monument to the ideals of freedom, respect for cultural diversity, and inclusiveness in the city of Los Angeles?

Mr. Razi: The Freedom Sculpture is one of the greatest legacies of the Iranian diaspora in the world. The Farhang Foundation wanted a reminder of Cyrus the Great’s achievements from ancient history and how his respect for religious freedom and freedom more generally are still very relevant today. We decided that a sculpture for everyone to see, a public piece of art, was the best way to celebrate this legacy.

Mr. Abbassi: The Freedom Sculpture is a celebration of one of the most important and valuable representations of our history and heritage, one that makes all of us proud no matter where we live. Inspired by the Cyrus Cylinder, the values the sculpture reflects go beyond heritage, border, and culture, resonating with the deepest and most esteemed of human values. Blessed by living in the largest community of people of Iranian descent outside of Iran, the Iranian American community of Los Angeles felt an obligation to underscore the common values that make all humans proud through the gifting of the Freedom Sculpture. 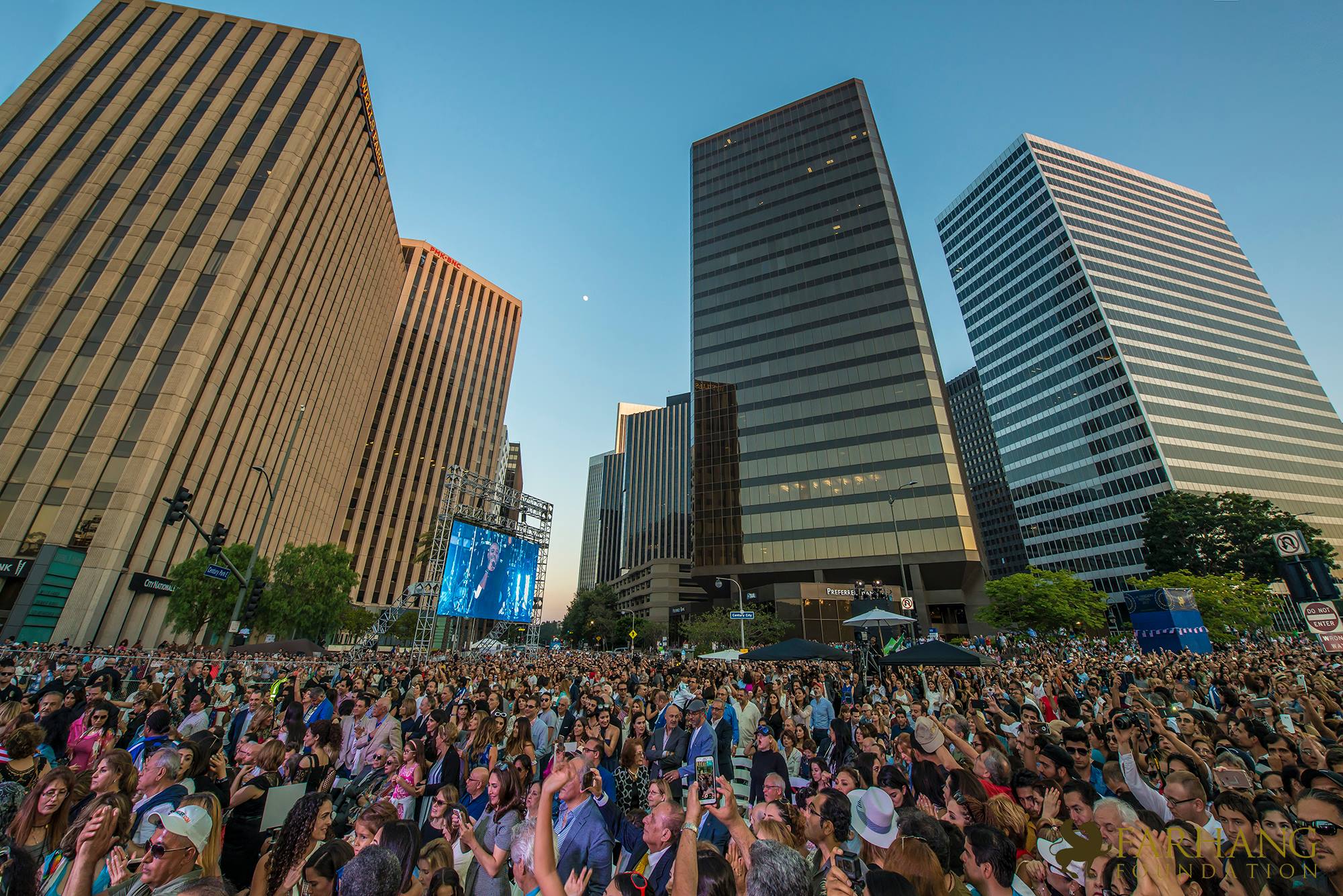 Between 50-70,000 people were on hand to witness the unveiling ceremony on the Fourth of July. How did the Freedom Sculpture’s unveiling impact Los Angeles and the perception of Iranian Americans?

Mr. Razi: During these times, with so much negative publicity around Iran’s regime, it is important to show the rich history of Iran – how Iranians have contributed to mankind. The impact of the unveiling has been incredible. We had a very large crowd and the program went according to plan with music and fireworks. Los Angeles has so much diversity that we wanted to give the sculpture to this city because it is the perfect location to send a message of freedom and tolerance to all of humanity.

Mr. Abbassi: As individuals, Iranian Americans shine in every aspect of industry, business, academia, science, and culture. While each accomplished person of Iranian descent elevates the perception of our community as a whole, we have never had the opportunity to convey our true strength through a collective effort. This event clearly illustrated that Iranian Americans come together for a common good. For Los Angeles, it served as validation for the strength of diversity. The Freedom Sculpture reinforces the values that make Los Angeles great.

What do you consider to be the greatest success of the Freedom Sculpture’s unveiling ceremony?

Mr. Razi: The unveiling ceremony established the sculpture as an icon of Los Angeles, and showed that Iranians came from the same place where the first charter of human rights was born. The ceremony mobilized our community. 70,000 Iranians came together to show their pride and to teach America the history of Iran. Like the Statue of Liberty, the Freedom Sculpture relied on large and small donors alike, a monument belonging to all.

Do you think increasing anti-immigrant rhetoric and policies have contributed to some of the Freedom Sculpture’s universal support?

Mr. Abbassi: Through much unnecessary rhetoric, we sometimes become blind to what makes us such a unique species. We need periodic reminders of the goodness that we each hold and can impart onto others. The Freedom Sculpture provided the opportunity for many to express their belief in tolerance, kindness, and acceptance.

What is the significance of designating the Fourth of July as the unveiling ceremony for the Freedom Sculpture?

Mr. Razi: The Fourth of July was chosen because Jefferson and the Founding Fathers, who were inspired by Cyrus the Great, fostered the idea of freedom of religion in the United States Constitution. Respect for and elevation of cultural diversity, harmony among people of different ethnicities, freedom, and inclusiveness are what make Los Angeles the most unique and the most global metropolis in the world and the perfect place to build the Freedom Sculpture.

Mr. Abbassi: Many of the concepts integrated into the fabric of the ideals of the Founding Fathers’ message leading to the independence of the United States originated from the values encapsulated in the Cyrus Cylinder. As such, this was a perfect day to reiterate these same values and our continued belief in their virtue.

Pouria Abbassi is President and CEO of the Golbanoo Group, a specialty business management & consulting firm. Mr. Abassi also serves on the Freedom Sculpture Committee and his specific responsibility was to lead all communication and coordination with City of Los Angeles agencies, elected, and appointed officials for both the permitting and gifting of the sculpture and the approval and permitting of the Freedom Festival.

Ali C. Razi is the founder and former chairman of the Farhang Foundation and the President of The Stratham Group of Companies. He is a Trustee Emeritus of California State University and member of the Board of Governors of California State University Foundation. Mr. Razi, the founder of the Farhang Foundation, was also the chairman of the foundation when the Freedom Sculpture project was conceived and initiated. He played a major role in bringing together the key individuals who would eventually join him in the committee tasked with transforming the concept into reality.