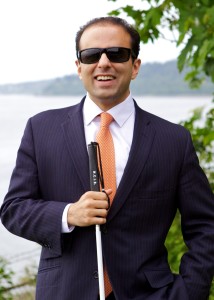 SEATTLE – State Sen. Cyrus Habib (D-WA) today announced his victory in Tuesday’s crowded primary election for Washington State Lieutenant Governor. If successful in the November general election, Habib will become the first Iranian American to be elected to the position of Lieutenant Governor, the highest officer of a state after the Governor.

Habib was one of eleven candidates in the race to replace current Lt. Gov. Brad Owen (D-WA), who announced his retirement earlier this year.  Washington State utilizes an open primary system. The top two vote-getters in the primary, regardless of party affiliation, will move on to the general election.

Unofficial results show Habib clinging to a narrow lead over Republican Marty McClendon. The two candidates will now face off in the November election, but given Washington State’s democratic leanings, Habib will likely be considered the front runner in the race.

In 2014, Habib was named one of the “40 Under 40 Political Rising Stars” by the Washington Post. He was also named one of “12 State Legislators to Watch” by Governing Magazine. Habib recently served on the 2016 Democratic National Convention Platform Committee.

In the state senate, Habib serves as the vice chair of the Technology and Economic Development Committee, as well as on the Business and Financial Services and Transportation committees. He was the prime sponsor of the Washington State Jobs Act, which became law in March of 2014 and enables start-up companies in Washington State to engage in equity crowdfunding.

Habib is the first American of Iranian heritage to serve in a state legislature and is the highest ranking Iranian American in elected office. He was raised in Bellevue, Washington, and at the age of eight, he lost his eyesight to a rare form of childhood cancer. He attended Columbia University, Oxford University as a Rhodes Scholar, and Yale Law School, where he was editor of the law review.