Masood Ahmed, director of the Middle East and Central Asia Department at the IMF outlined the effects that sanctions have had on the Iranian economy and what we can expect now they are lifted as a result of  the Nuclear Agreement. Mr Ahmed outlined how since the implementation of sanctions in 2011, Iran’s oil exports have dropped by half, the costs of doing business have risen, trade has become more difficult, and high inflation and volatile exchange rates have caused increased instability.

The removal of sanctions on Iran is having immediate economic benefit for the Islamic Republic as the IMF expects exports in oil to increase by ½ million barrels a day. Iran will also have access to assets that had previously been frozen and the costs of doing business will decrease. Furthermore, it’s expected that the economy will experience a 4-5% increase in productivity that will benefit not only Iran, but also the many countries with which it trades.

“Even if they don’t do anything else to change the economy, you’ll see a positive impact from the removal of sanctions,” Ahmed said. “But sustaining that will require dealing with some long-standing issues mostly relating to the business environment, the banking sector, and the structure of the economy.”

Ahmed notes that Iran has a well-diversified resource-rich economy, the largest gas reserves to ever be developed, and a highly-skilled labor force. Still, the lower oil prices of today are a huge international problem and Ahmed argues that the nation needs a better policy framework that will decrease Iranian dependence on the volatility of oil prices. Additonally, Iranian banks are in need of restructuring, greater transparency, and stronger governance, and a more flexible labor market is necessary to reduce unemployment. There also needs to be an increase in productivity to raise living standards and create jobs for young people, especially women. The question is not about what needs to be done but whether Iran will make the necessary reforms.

“The level of capital in the economy is actually quite high,” said Cerisola.  “The issue, which is a bit more difficult to assess, is how efficient this capital is. A lot of this capital needs to be modernized and that could require really significant amounts of new investments.”

Chamlou explained that Iran is in need of direct foreign investment of around $32-50 billion per year, for that kind of investment to come in, Iran would need to make a lot of reforms to its current laws. Maloney explained that Iranian President Hassan Rohani is intent on making the necessary reforms, but doing so in Iran’s political structure will be difficult. Fortunately, business interests effect all in government, not just reformists, and even conservatives are becoming more open to change as they recognize the massive monetary benefits. The rising tide may just lift all Iranian ships.

Sanctions have significantly impacted Iran’s economy and their removal will greatly benefit the country.  However, to sustain the economic growth Iran will experience, the Islamic Republic will need to address long-standing economic issues and modify legislation to encourage direct foreign investment. Iran has the tools and capital necessary to do this, but the political climate may make change difficult.

Watch video of the panel discussion below:

Take a Look at our Infographic outlining the talk’s most important points: 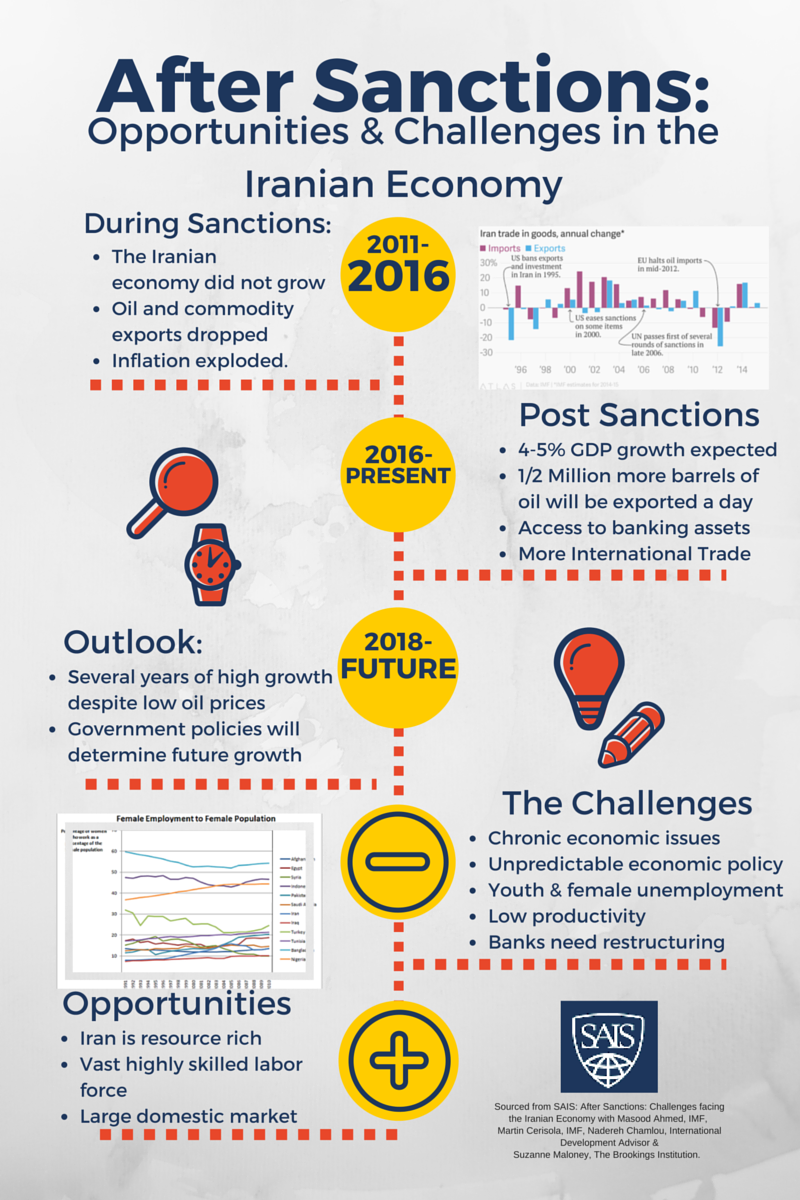