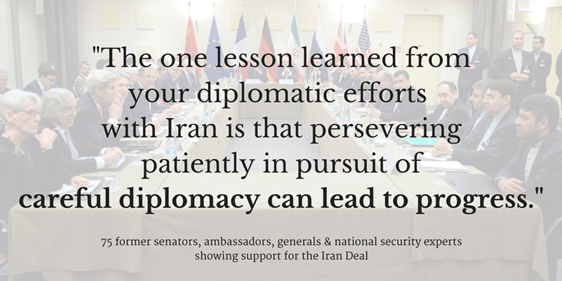 Washington, DC – As debate over Iran sanctions legislation lingers in Washington, today marks the two-year anniversary of the signing of the Iran Nuclear Agreement – otherwise known as the Joint Comprehensive Plan of Action (JCPOA) – between the P5+1 coalition (U.S., U.K., France, Russia, China, and Germany), the European Union, and Iran.

The International Atomic Energy Agency (IAEA), responsible for verifying the deal’s success, has issued multiple reports, most recently in June 2017, documenting Iran’s continued implementation and compliance under the JCPOA. Even the Trump administration notified Congress in April of this year that Iran is complying with the terms of the deal. Finally, delegates of the United Nations Security Council called for the deal’s continued implementation, calling the “historic accord a significant diplomatic achievement that made the world a safer place in the first year of its performance.”

In 2016, the Public Affairs Alliance of Iranian Americans (PAAIA) commissioned Global Impact Strategies (giStrat) to conduct a data driven scientific assessment on strengthening compliance of the Iran nuclear agreement. The report indicated Iran will likely continue to comply with the JCPOA, finding that the lifting of nuclear-related sanctions has been critical in preventing Iran from developing nuclear weapons capabilities. The report recommends that the U.S. uphold the threat of nuclear related sanctions without reemploying or instituting new ones.

“So far, it looks like the deal will survive, but it is coming under heavy pressure,” wrote PAAIA Policy Advisor Alireza Nader, a senior international and defense researcher at the RAND Corporation. “Iran has been deemed by the IAEA to be fully in compliance, but renewed American sanctions, regional crises, and dissatisfaction with the JCPOA within Iran will put a lot of pressure on the agreement.”

PAAIA believes American interests are best served by supporting the Iran Nuclear Deal and engaging the Iranian people. The deal presents an opportunity for Iran’s path out of its long isolation and is its best chance to avoid another disastrous war in the Middle East.

The United States should avoid measures that would derail the JCPOA and splinter international cooperation over Iran’s nuclear program. Such measures only strengthen elements in Iran who want to see the collapse of the agreement and alienate the Iranian people from the West.

The Iran deal is working. It verifiably blocks Iran’s paths to a nuclear bomb and greatly strengthens the security of the United States and our allies. PAAIA’s annual polls of Iranian Americans indicate strong support for the deal, finding in 2016 that 65 percent of survey respondents approve of the JCPOA.